During the course of our lives, we meet many different people from all walks of life. From our encounters, we gain new perspective and awareness and sometimes enlightenment. In 1990, as a young officer stationed at Fort Benning, Georgia, I was assigned to the staff duty roster as was many of my peers. Once your name came up in the rotation, you could be assigned to a host of additional duties and assignments. One of those roles was that of an Escort Officer for visiting dignitaries, high ranking military officers from foreign countries and other high profile personalities that would visit the base. The Escort Officer was charged with fulfilling the itinerary and coordinating different functions during the visit.

Fort Benning is one of our premier Army bases and is the Home of the Infantry. Each year, the Infantry School trains thousands of recruits, non-commissioned officers and officers for warfare. The base was a bustle of activity and there were always visitors. One day, my name came up in the rotation and I was called to the Post HQ to receive my assignment. Upon reading my orders, I was struck with the emotions of being both tremendously excited and terribly nervous. I was going to be the Escort Officer for a veteran of World War II, Korea and Vietnam who had been awarded the Congressional Medal of Honor.

The veteran whom I would have the honor and privilege of escorting was none other than Colonel Lewis L. Millett. During the Korean War, then Captain Millett was cited for valor for leading the last major American bayonet charge against an enemy. He sported a distinctive red handle-bar mustache, this would be his moniker. Part of his citation reads, “His dauntless leadership and personal courage so inspired his men that they stormed into the hostile position and used their bayonets with such lethal effect that the enemy fled in wild disorder.” Colonel Millett had a long and storied military career beginning in World War II. He enlisted in the U.S. Army Air Corps in 1940, he soon went AWOL (Absent without Leave) so he could join the Canadian Army and get into to fight against Nazi Germany. After serving in England with Canadian troops, he transferred back to the U. S. Army after Pearl Harbor in 1942. A year later he would be court-martialed for desertion, but by then he had distinguished himself in combat and was a sergeant fighting in Italy. He had already taken part in the invasion of North Africa and had earned the Silver Star for action in the Tunisian Campaign. He was fined $52 for his court-martial and later received a battlefield promotion to lieutenant.

I remember going to receive them in my best pressed BDU’s and spit-shined jump boots, standard SOP for a good North Georgia grad. Although age and time had changed his hair and mustache from red to white, his features and presence were striking. He wore his class A uniform and my first gaze peered at the little blue ribbon with the small white stars, his Medal of Honor award. I snapped off the best salute I could muster and greeted him firmly, “Good morning Colonel Millett and welcome to Fort Benning!” He crisply returned my salute and firmly responded, “Thank you Captain Daniel! Great to be here again.”  Warrant Officer Payne was equally striking in his Aussie uniform sporting their distinctive shorts. We made our way to our van and then headed off to make our stops on the itinerary.

One of the visits on our itinerary which has been etched in my memory all these years is a stop we made to a unit of infantry recruits training in the field. Upon nearing our destination, this was the most visibly excited I had seen the two heroes. It was a pretty hot day, even in the fall, and Colonel Millett had taken off his class A jacket, but as we exited the vehicle, Colonel Millett grabbed his jacket and looked over at me and winked as he said, “I can’t let down the troops, they will want to see this little ribbon.” I smiled and said, “Yes sir, they certainly will.” When he addressed the troops, you could see that he was in his element. He spoke to them with empathy, but his delivery was confident and commanding. He was a leader. As I listened to him speak, my mind drifted to imagine his speech to his troops some forty years before, as he stood at the base of a cold, wind-swept and heavily defended hill in Korea and commanded his troops to fix bayonets and attack. I could see the young officer in battle dress with the turned up cap and red handle-bar mustache yelling the order to charge. I could see him leading and advancing on the enemy with tenacity and purpose, driving out the enemy with the fury of cold steel. My mind returned to the present and I saw the same passion from a distinguished veteran with white hair and mustache, his presence still captivating.

Warrant Officer Payne would not go unnoticed, as we were walking among the troops; one errant soldier was resting his hand over the muzzle of his weapon. Warrant Officer Payne slapped him on the shoulder and pointed his finger in the young troops face and said, “Keep your bloody hand off of that muzzle if you don’t want it blown off!” The poor soldier’s eyes were as big around as saucers as he corrected himself and held the weapon properly. The OIC (Officer in Charge) of the site and me glanced over at each other and shrugged. Slapping the soldier about the shoulders was not generally the approved method of correcting a soldier, but neither I nor the OIC were going to admonish a recipient of the Victoria Cross. I will guarantee that the soldier never made that mistake again.

As we departed on our way back into the main post, the two men were in great spirits albeit a little tired from the day’s activities. We talked about things going on in the Army at that time and they shared stories of their time in service and experiences they had throughout the years. It was a genuine pleasure to not only learn about their experiences, but to also learn about them personally, as men. They had families; they had children and grandchildren, aches and pains of growing old, all of the things you think about with “normal” people. The fact is they were “normal” people, certainly blessed with some extraordinary traits, but never the less, “normal” people. This was struck home when I asked Colonel Millett, “What was it like being a hero?” His answer was telling, he leaned back and said, “Well Captain Daniel,” then he leaned back into me and his words grew softer, “Chip, we are all heroes. Every one of us who makes a stand for freedom and it’s our responsibility to continue to fight for that freedom.” He leaned back into his seat and then said, “Oh, it’s a lot of fanfare and a few free meals here and there!” Warrant Officer Payne grinned as he took a drag off of his English cigarette and we continued on to their quarters.

Their VIP quarters were situated in one of the “Quads” at Fort Benning, the “Quads” were used as quarters for students staying at the post and theirs had been specially upgraded for VIP’s. When we reached our destination, I was a bit saddened that the day was going to end, and then Colonel Millett asks, “Will you come in and have a drink with us?” I said, “It would be my honor sir.” I walked in to their quarters with them and they had a dayroom that was stocked with refreshments for them. Warrant Officer Payne had a scotch and Colonel Millett and I had a beer. We had some more laughs and stories and then it was time to leave. We shook hands and we all wished each other well. Driving home that evening, I thought about the day and the wonderful experience I shared with two war heroes. I called my parents that night to tell them about my Escort Duty with Colonel Millett and Warrant Officer Payne. I told my dad, “I spent the day and had a beer with a hero today.” My dad said that I would remember that for the rest of my life. I sure have and I sure will. 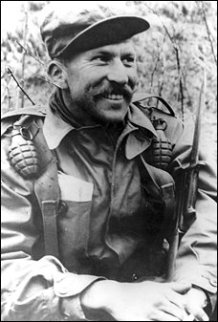